Deprecated: strripos(): Non-string needles will be interpreted as strings in the future. Use an explicit chr() call to preserve the current behavior in C:\HostingSpaces\srsportsmen\snakeriversportsmen.com\wwwroot\res\inc\functions.php on line 251
 Black Powder Muzzleloader | Snake River Sportsmen - Safety, Education & Family Recreation in Shooting Sports

A muzzleloader is any firearm into which the projectile and usually the propellant charge is loaded from the muzzle of the gun (i.e., from the forward, open end of the gun's barrel). This is distinct from the more popular modern (higher tech and harder to make) designs of breech-loading firearms. The term "muzzleloader" may also apply to the marksman who specializes in the shooting of ML Firearms. The term of art is not meant to connote anything about whether the weapon's barrel had received the further machining step of rifling the barrel, so there are two broad classifications: rifled muzzleloaders and smooth bore muzzleloaders. The firing methods, paraphernalia and mechanism further divide both categories as do caliber (From cannons to tiny caliber palm guns).

Modern muzzleloading firearms range from reproductions of sidelock, flintlock and percussion long guns, to in-line rifles that use modern inventions such as a closed breech, sealed primer and fast rifling to allow for considerable accuracy at long ranges. Mortars are muzzle loaded and are a type of short-range artillery.

Muzzleloading can apply to anything from cannons to pistols but in modern parlance the term most commonly applies to black powdersmall arms similar in the main to the weapons used. It usually, but not always, involves the use of a loose propellant (i.e., gun powder) and projectile, as well as a separate method of ignition or priming. 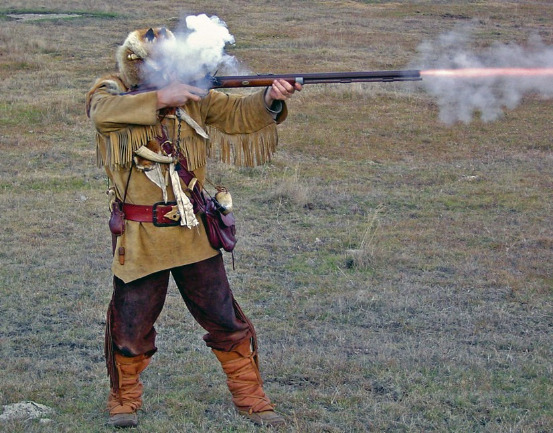 Gunpowder, by pouring in loose powder, inserting a pre-measured bag or paper packet of gunpowder (called a cartridge) or by inserting (the less desirable) solid propellant pellets. The gunpowder used is typically black powder or blackpowder substitutes like Pyrodex.

Wadding, made from felt, cloth or card. In shotguns, this is placed in when the ball becomes difficult to press into the barrel (in small arms). In rifles firing round ball, a lubricated patch of fabric is wrapped around the base of the ball which grips the rifling and imparts spin to the ball. In Minié rifles, no patch is used as the projectile has a base which expands to grip the rifling.

On most naval cannons, the wadding at the end of the barrel not only served the purpose of creating a better seal around the shot, but to also act as a plug, to stop the shot rolling out due to the swaying of the ship.

The projectile, most typically a solid lead ball, loose shot, a Minié ball or a jacketed modern bullet in a plastic sabot.

Since the projectiles and wads are generally tight-fitting, a ramrod is used to push the wadding and projectile down to ensure they are firmly seated on the propellant charge. During Napoleon's time a round ball and pre-measured powder charge were wrapped in a paper casing. After a shot the user would tear the end of the paper tube off and fill the flash pan. Next he would pour the remaining powder into the barrel followed by the ball encased in the paper wrapping. The butt of the gun was then hit on the ground and the ball would slide to the breach. A trained marksman could fire up to 3 rounds per minute.

When aiming for great accuracy, muzzle-loaders are usually cleaned ("swabbed") before reloading, so that there is no residue left in the barrel to reduce accuracy, though in competitions run by the international governing body, the MLAIC, this is prohibited for military rifle and musket events. However, in small arms muzzleloading rifles, swabbing is only done after every 5-10 shots. If cleaned after every shot, the barrel will not break in for hundreds of shots. Large caliber muzzle-loaders such as cannons are always swabbed between shots to prevent accidents caused by live sparks igniting the fresh charge of powder as it is being loaded.

Muzzleloading is the sport, or pastime of firing muzzleloading guns. Muzzleloading guns, both antique and reproduction, are used for target shooting, hunting, historical re-enactment and historical research. The sport originated in the United States in the 1930s, just as the last original users and makers of muzzleloading arms were dying out. The sport received a tremendous boost in the 1960s and 1970s. The Muzzle Loaders Associations International Committee (www.MLAIC.org) was formed in 1970 and held its first World Championship in 1971. Since then a flourishing industry manufacturing working reproductions of historic firearms now exists in the United States and Europe, particularly in northern Italy near Gardone.

Driven by demand for muzzleloaders for special extended primitive hunting seasons, firearms manufacturers have developed in-line muzzleloading rifles with designs similar to modern breech-loading centerfire designs. Knight Rifles pioneered the in-line muzzleloader in the mid-1980s. Savage Arms has created the 10ML-II, which can be used with smokeless powder, reducing the cleaning required.