Skeet shooting is a recreational and competitive activity where participants, using shotguns, attempt to break clay disks automatically flung into the air from two fixed stations at high speed from a variety of angles.

Skeet is one of the three major types of competitive shotgun target shooting sports (the others are trap shooting and sporting clays). There are several types of skeet, including one with Olympic status (often called Olympic skeet or international skeet) and many with only national recognition. 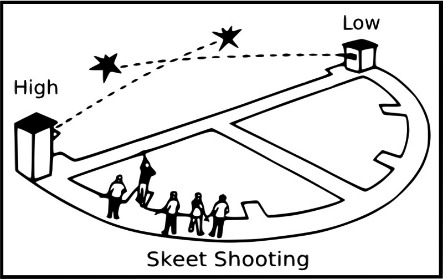 The international version of skeet uses a target that is slightly larger in diameter [(110±1) mm vs. 109.54 mm], thinner in cross section [(25.5±.5) mm vs. 28.58 mm], and has a thicker dome center, making it harder to break. International targets are also thrown a longer distance from similar heights (over 70 yards), resulting in a faster target speed.

The firearm of choice for this task is usually a high-quality, double-barreled over and under shotgun with 26- to 30-inch barrels and very open chokes. Often, shooters will choose an improved cylinder choke (one with a tighter pattern) or a skeet choke (one with a wider pattern), but this is a matter of preference. Some gun shops refer to this type of shotgun as a skeet gun. Alternatively a sporting gun or a trap gun is sometimes used. These have longer barrels (up to 34 inches) and tighter choke. Many shooters of American skeet and other national versions use semi-automatic and pump-action shotguns with great success. The use of clay targets to simulate hunting scenarios is one reason the targets are called clay pigeons.

The event is in part meant to simulate the action of bird hunting. The shooter shoots from seven positions on a semicircle with a radius of 21 yards (19 m), and an eighth position halfway between stations 1 and 7. There are two houses that hold devices known as "traps" that launch the targets, one at each corner of the semicircle. The traps launch the targets to a point 15 feet above ground and 18 feet outside of station 8. One trap launches targets from 10 feet above the ground ("high" house) and the other launches it from 3 feet above ground ("low" house).

The shooter must then re-shoot his first missed target or, if no targets are missed, must shoot his 25th shell at the low house station 8. This 25th shot was once referred to as the shooter's option, as he was able to take it where he preferred. Now, to speed up rounds in competition, the shooter must shoot the low 8 twice for a perfect score.

Skeet shooting was invented by Charles Davis of Andover, Massachusetts, an avid grouse hunter, in the 1920s as a sport called Clock Shooting. The original course was a circle with a radius of 25 yards with its circumference marked off like the face of a clock and a trap set at the 12 o’clock position. The practice of shooting from all directions had to cease, however, when a chicken farm started next door. The game evolved to its current setup by 1923 when one of the shooters, William Harnden Foster, solved the problem by placing a second trap at the 6 o’clock position and cutting the course in half. Foster quickly noticed the appeal of this kind of competition shooting, and set out to make it a national sport. The game was introduced in the February 1926 issue of National Sportsman and Hunting and Fishing magazines, and a prize of 100 dollars was offered to anyone who could come up with a name for the new sport. The winning entry was "skeet" chosen by Gertrude Hurlbutt. The word "skeet" was said to be derived from the Norwegian word for "shoot" (skyte). During World War II, skeet was used in the American military to teach gunners the principle of leading and timing on a flying target. 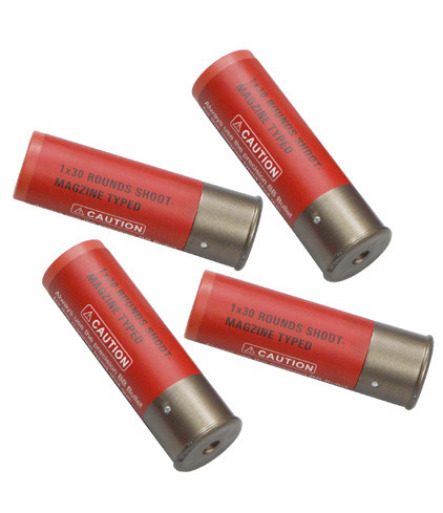 Trapshooting is one of the three major disciplines of competitive clay pigeon shooting (shotgun shooting at clay targets). The other disciplines are Skeet shooting and Sporting Clays. Within each discipline, there are variations.

Trapshooting is shot throughout the world's countries. Trapshooting variants include but are not limited to international varieties Olympic trap, also known as "International Trap"; Double trap (also an Olympic event), Down-The-Line, also known as "DTL" and Nordic Trap. American Trap is the predominant version in the United States and Canada.

Trapshooting was originally developed, in part, to augment bird hunting and to provide a method of practice for bird hunters. Use of targets was introduced as a replacement for live pigeons. Indeed, one of the names for the targets used in shooting games is clay pigeons. The layout of a modern trapshooting field differs from that of a Skeet field and/or a Sporting Clays course.

Trapshooting has been a sport since the late 18th Century when real birds were used; usually the Passenger Pigeon, which was extremely abundant at the time. Birds were placed under hats or in traps which were then released. Artificial birds were introduced around the time of the American Civil War. Glass Balls (Bogardus) and subsequently "clay" targets were introduced in the later 1800s,, gaining wide acceptance, but shooting of live birds is still practiced in some parts of the United States.

Trapshooting is typically shot with a 12 gauge shotgun. Smaller gauge firearms can be used, but no allowance is given. Trapshooting events are either single or double target presentations.

Both general purpose shotguns and more specialized target-type shotguns are used in trapshooting. Examples of trap guns are single-barreled shotgun (such as the Browning BT-99, Perazzi MX-series, Krieghoff K-80, [Kolar] T/A) or a double barreled shotgun such as the Beretta DT-10, Browning XT Trap, and SKB'S. Shooters who shoot all sub-events will often buy a combination-set of a single and double barrel for shooting both singles and double targets respectively. Self-loading (semi-automatic shotguns) are popular for recreational shooting due to the lower perceived recoil and versatility because they can be used for singles, handicap, and doubles. Shotguns used in trapshooting can differ from field and skeet guns in several ways and normally are designed with a higher "point of impact" as the targets are intended to be shot as they rise.

Trapshooting shotguns can be adjustable. Stocks may have a "Monte Carlo" (fixed, raised "comb") configuration and/or include a comb height adjustment, a butt plate adjustment for length, angle or both. Trap guns typically have longer barrels (750–850 mm, 30-34 inches), possibly with porting and featuring tighter chokes to compensate for the longer distances at which trapshooting targets are broken. The majority of trap shotguns built today feature interchangeable choke tubes as opposed to older guns which used chokes of a "fixed" constriction. Interchangeable choke tubes can come in a variety of constrictions and may use names such as "modified", "improved modified" and "full". Trap guns are built to withstand the demands and stress of constant and lengthy repeated use - hundreds of shots in a single day of events, whereas typical field guns are built to be lighter, carried afield and not shot in such quantity.

Common accessories include wearing a vest or pouch that will hold at least 25-50 cartridges or "shells" for singles and/or doubles events. Most ranges and clubs require eye and ear protection.

Shooting glasses may be something as simple as the eyeglasses or sunglasses one presently wears. Specialized shooting glasses "systems" typically have interchangeable colored lenses, are adjustable and designed for high impact resistance. A spectrum of different colored lenses are offered to compensate for light conditions as well as enhance the color of the target thrown while muting the color of the background. Adjustable glasses allow on-range changes for conditions - light, color, etc.

Hearing protection also comes in a variety of choice. Dense foam and electronics are used to reduce or attenuate sound levels. Typical hearing protection is either an "earmuff" (over-the-the-ear) or an "ear plug" (inner-ear). Some shooters use both simultaneously to gain greater noise reduction (NRR).

Trapshooting requires the use of a target throwing device(s). American Trap and DTL utilize a single trap machine which is typically enclosed within a traphouse, downrange from the shooters' shooting positions. The house provides protection of the machine (e.g. from weather and errant shots) and also acts to obscure the machine's oscillating throwing position. International or Olympic trap employs 15 trap machines housed within a large elongated traphouse which is recessed into the ground to form a "bunker" and/or resemble a trench. International or Olympic Trap may at times be referred to as Bunker Trap.

Modern automatic throwing machines can store hundreds of clay targets in a carousel and systematically self-load targets onto the throwing mechanism. Manual electric target throwers require a person in the traphouse with the trap machine, to set the target(s) by hand onto the machine arm. For both of these types, an electrical signal, from the push of a button or a sound activated device, causes the trap machine to throw its targets after the shooter calls for their bird(s).

Temporary or informal trapshooting can utilize other methods to launch targets. The simplest is a "hand thrower" which is a hand-held arm which holds and releases that target when a person swings it. Another type of manual, non-electrical thrower utilizes a spring-loaded mechanism which is cocked and subsequently released by hand or foot.